The latest edition of the Federal Reserve’s (Fed) Beige Book was released Wednesday, September 7, 2016, and based on our analysis, continues to deliver a positive view of the current state of the U.S. economy. The Beige Book is a qualitative assessment of the U.S. economy and each of the 12 Fed districts individually. The report is prepared eight times per year, ahead of each of the eight Federal Open Market Committee (FOMC) meetings. The next FOMC meeting, the sixth of the year, is September 20-21, 2016. We believe the Beige Book is best interpreted by measuring how the descriptors change over time. The qualitative inputs for the June 2016 Beige Book were collected from mid-July through August 29, 2016. Thus, they captured Main Street’s reaction to:

In September 2016, the barometer ticked down to +55 after the +61 reading in July 2016. At +55, the September 2016 reading is now back in the middle of the range it has been in since early 2012. All of the deterioration in the Beige Book versus July’s came in the three Fed districts in the nation’s oil patch (Minneapolis, Dallas, and Kansas City), despite a pickup in oil production in the past few months. Our Oil States Barometer (the barometer for the three Fed districts that include the top oil-producing states) moved from +21 in July to just +7 in September, matching the +7 reading seen, on average, in the 8 Beige Books ending in June 2016, which coincided with the worst of the declines in oil production and prices. The +7 reading in September was even more disappointing given that the +21 reading in July put sentiment in these districts back to a level not seen since prior to the peak in oil prices in June 2014. 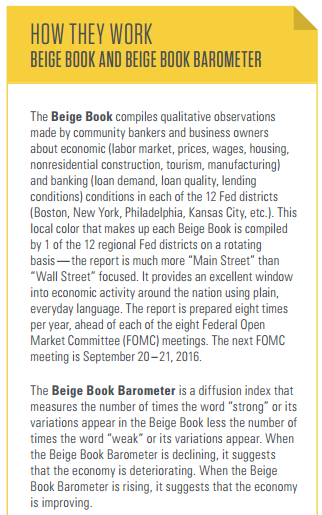 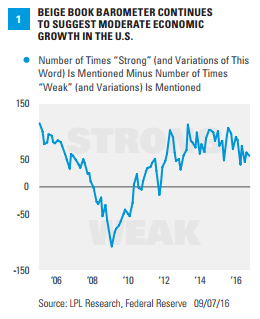 Now that the Fed has initiated its first rate hike cycle since 2006, FOMC members and market participants-who are trying to gauge what the Fed may do next-will be watching inflation closely. Each Beige Book provides an economy-wide assessment of wages and prices. The September 2016 Beige Book noted that “wage growth ranged from flat to strong across the Districts, but most reported that wage pressures remained fairly modest,” and “employment expanded at a moderate pace since the previous report.” 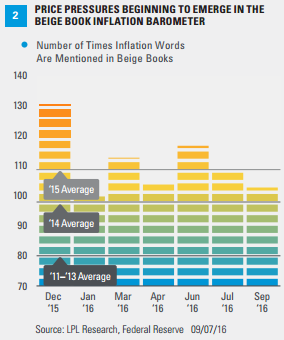 One final thought on the Beige Book. Despite the elevated level of uncertainty surrounding the U.S. presidential election and the outlook for the global economy, optimism still reigns. In the September 2016 Beige Book, the word “optimism” (or its related words) appeared 15 times, whereas the word “pessimism” appeared just once [Figure 3]. In the 14 Beige Books released since early 2015, optimism appeared, on average, 18 times per Beige Book, while the word pessimism has appeared a total of just 18 times, with 12 of the 18 mentions coming in the Dallas and Kansas City districts, and were related to the outlook for the oil and gas sector. 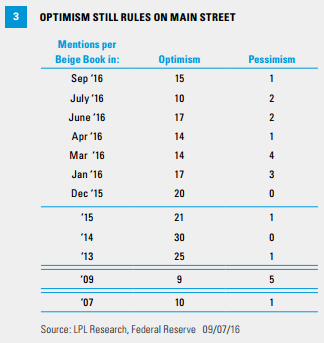 Any economic forecasts set forth in the presentation may not develop as predicted and there can be no guarantee that strategies promoted will be successful. Investing in stock includes numerous specific risks including: the fluctuation of dividend, loss of principal and potential illiquidity of the investment in a falling market. The fast price swings in commodities and currencies will result in significant volatility in an investor’s holdings.

Because of its narrow focus, specialty sector investing, such as healthcare, financials, or energy, will be subject to greater volatility than investing more broadly across many sectors and companies. Investing in foreign and emerging markets securities involves special additional risks. These risks include, but are not limited to, currency risk, geopolitical risk, and risk associated with varying accounting standards. Investing in emerging markets may accentuate these risks.

To the extent you are receiving investment advice from a separately registered independent investment advisor, please note that LPL Financial LLC is not an affiliate of and makes no representation with respect to such entity.