Should stock investors sell now? It’s been a good year for stocks–the S&P 500 has returned 5.7% this year despite the drop on Friday. But has it been too good? Seven-and-a-half years into the bull market, valuations are high and we see little upside in stocks between now and year-end. Friday’s more than 2% drop was the S&P 500’s first drop of more than 1% since just after the Brexit vote on June 27, 2016, so we were due for a pullback. Add to that, September is a seasonally weak month. All of that begs the question, should you sell now? Certainly taking some profits or rebalancing portfolios according to your regular plan is prudent. But in this commentary we lay out reasons why selling now may not be the best move.

ARE STOCKS TOO EXPENSIVE?

We often hear that stocks are expensive. In fact, last week we noted that the S&P 500 price-to-earnings ratio (PE) using the median calculation is more than 50% above its long-term average. Traditional market cap weighted valuations are also high–the current PE of 18 (trailing four quarters) is above the average of 15.2 going back to 1950, and even above the higher post-1980 average of 16.4.

But are high valuations a reason to sell? We don’t think so. Valuations have not been good predictors of stock market performance over the subsequent year, as shown in Figure 1. (If the dots in Figure 1 formed something resembling a straight line, more like Figure 2, it would be more indicative of a relationship.) The correlation between the S&P 500’s PE and the index’s return over the following year, at -0.31, is relatively low (based on 45 years of data). Stocks can stay overvalued longer than we might think they should, so we encourage investors to focus more on macroeconomic, fundamental, and technical factors, not valuations, for indications of an impending market correction or bear market. 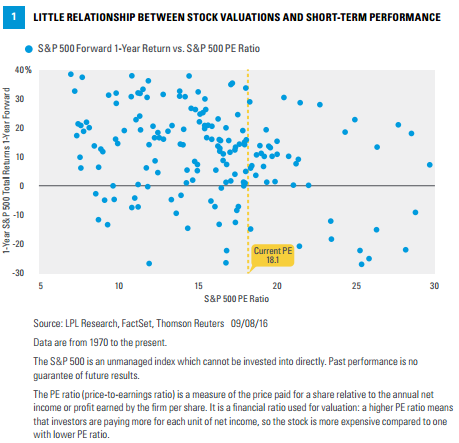 The relationship between stock market performance and valuation gets much stronger when looking at longer time periods. As shown in Figure 2, when plotting PE against stock returns over the subsequent 10-year period, the correlation (negative) is quite strong. As PEs rise, subsequent returns are lower; and vice versa. Eyeballing the two charts it is easy to see the difference, but we can put numbers on it. The correlation between PE and returns over the next 10 years is -0.87, a much closer relationship than PEs and one-year returns at -0.31 (-1 is perfect negative correlation and 0 equates to no correlation). 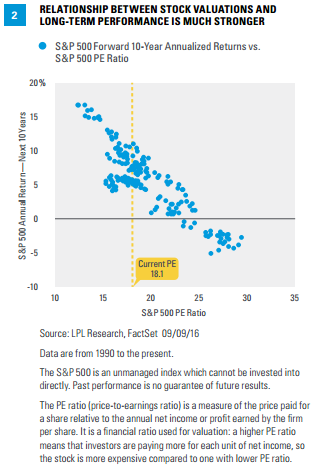 DOES THE CALENDAR SAY SELL?

What about September being a historically weak month? Could Friday’s drop be the start of a big September sell-off? The market trend appears to be a key determinant of the market’s performance in September and for the rest of the year. We can measure the market’s trend based on the S&P 500 level compared with its 200-day moving average. When stocks are in an uptrend, i.e., above the 200-day moving average, heading into September, they usually hold up well. In fact, the last 47 instances when the S&P 500 was above the 200-day moving average on September 1 (back to 1950), the average maximum drawdown in September was just 1.9%, the maximum drawdown over the rest of the year was a manageable 4.4%, and stocks were higher from September through year-end 83% of the time [Figure 3].

Conversely, nearly all of the biggest late-year drops took place during the 19 instances when the S&P 500 started September in a downtrend, i.e., below its 200-day moving average (1987 was one big exception, falling as much as 32%). The average drawdown in these scenarios was 8.9%, about twice the average drawdown with the uptrend, while stocks were higher over the rest of the year only 57.9% of the time.

MORE REASONS TO HOLD ON

Valuations and the calendar may not be good reasons to sell, but are there, in fact, reasons to consider buying here? We have held our 2016 stock market forecast unchanged (mid-single-digit returns for the S&P 500 for the year), but a double-digit return year for stocks would not shock us, given these factors:

Neither valuations nor seasonality appear to be good reasons to sell stocks right now. In fact, a number of factors we have discussed here suggest stocks could potentially go higher between now and year-end. We are sticking with our mid-single-digit return forecast for 2016, but don’t be surprised to see a pickup in volatility and consider the opportunity to buy those dips.*

With this weekend marking the 15th anniversary of 9/11, let us all remember those who were lost on that tragic day and thank those who sacrifice to keep our neighborhoods and country safe. We will never forget.

*As outlined in our Midyear Outlook 2016 publication, we continue to expect mid-single-digit returns for the S&P 500 in 2016, consistent with historical mid-to-late economic cycle performance. We expect those gains to be derived from mid- to high-single-digit earnings growth over the second half of 2016, supported by steady U.S. economic growth and stability in oil prices and the U.S. dollar. A slight increase in price-to-earnings ratios (PE) above 16.6 is possible as market participants gain greater clarity on the U.S. election and the U.K.’s relationship with Europe.

The economic forecasts set forth in the presentation may not develop as predicted and there can be no guarantee that strategies promoted will be successful.

Investing in stock includes numerous specific risks including: the fluctuation of dividend, loss of principal, and potential liquidity of the investment in a falling market.

Because of its narrow focus, sector investing will be subject to greater volatility than investing more broadly across many sectors and companies.

All investing involves risk including loss of principal.

The Standard & Poor’s 500 Index is a capitalization-weighted index of 500 stocks designed to measure performance of the broad domestic economy through changes in the aggregate market value of 500 stocks representing all major industries.

To the extent you are receiving investment advice from a separately registered independent investment advisor, please note that LPL Financial is not an affiliate of and makes no representation with respect to such entity.